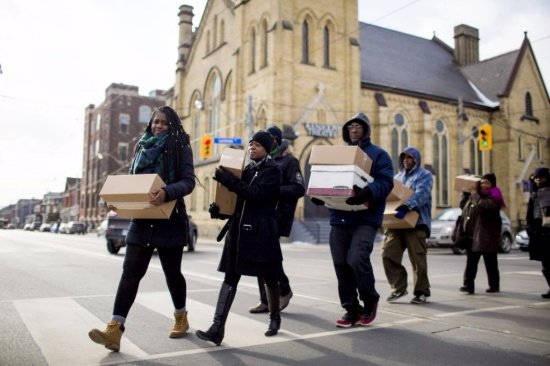 A Different Booklist will be moving across the street on Saturday. Help the owners carry its inventory to the new location beginning at 11 a.m.

A “parade of books” is what Itah Sadu visualized when a neighbour asked how they could get involved with A Different Booklist. The Bathurst St. store has been forced to move thanks to the closure and redevelopment of Honest Ed’s next door.

“I could just see a parade of people,” says Sadu, owner of the indie bookshop that caters to the African and Caribbean diaspora. And in a place that has become a cultural hub central to the community, she wanted to ensure that everyone knew it would still be open.

So the store is asking for the community’s help to carry its inventory of books across the street to its new location.

The news of the closing of Honest Ed’s and Mirvish Village is so big, Sadu notes, that people think everything in the area is leaving. “It just takes one person to say I think they’re closed; at least in this moment people will know that we are not closed.”

So they’re making an event out of it.

“It’s the opportunity for families to actually lift books up and move them to the other side of the street,” says Sadu.

Join the move beginning at 11 a.m. on Saturday at the current location at 756 Bathurst St. Volunteers will be carrying inventory across the street, to the bookstore’s new premises at 779 Bathurst St.

If you want to help, simply show up, ready to carry a few loads of books.